Yesterday, we had a great visit with Dick and Elaine Stoll. Dick worked for the old Michter’s Distillery in Schaefferstown, PA and was Master Distiller when the plant closed in 1990. He had a lot of insight into the business, as did Elaine who spent some time with Michter’s, as well.

Dick sampled a bit of our Bourbon and Rye, and much to our delight, thought it was right on track to be some pretty good whiskey.

They were also very gracious visitors and brought some of the good old-time Michter’s Rye that
was produced in the mid-1960s and bottled in the 1980s. If you can’t tell by the giddy look on Thomas’s face in the picture below, we were pretty excited to sample some Pennsylvania Rye that was made over 40 years ago. Also pictured from L to R are my uncle, Mike Matera, Dick Stoll, and my dad, Bill McKenzie. 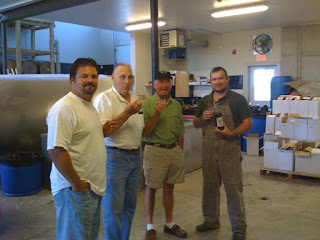