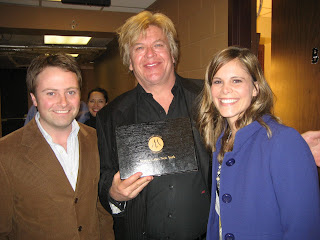 We just caught Ron White of Blue Collar Comedy Tour Fame at the Clemens Center in Elmira tonight. Ron didn’t disappoint and had the sold out crowd laughing hysterically for almost an hour and a half. That’s my wife Jenny and me pictured with Ron, below. We put together a little care package from Finger Lakes Distilling that included a sample of our upcoming corn whiskey release and a few FLD-branded cigars. For those of you that haven’t seen Mr. White, he likes to indulge in scotch and cigars during his comedy routines. Pretty awesome night.