The past few days have been filled with some of the most memorable experiences we’ve had since starting Finger Lakes Distilling. As I mentioned in our last newsletter, we were recently asked to participate in the re-creation of George Washington’s peach brandy down at his reconstructed distillery in Mt. Vernon.

It’s not common knowledge, but our founding father was, at one time, the largest commercial whiskey producer in the U.S. After fighting for our independence and serving as our first President, Washington re-focused his energy into entrepreneurial ventures, the distillery being one example, after being talked into it by his plantation manager, James Anderson (a Scot, of course). Below is a picture of the cornerstone of the historic distillery. 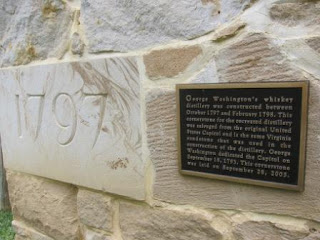 While rye whiskey was the main output from the distillery at Mt. Vernon, the records show that other spirits were produced. Peach brandy was produced in small quantities (~60 gallons per year), and was consumed primarily by guests at Washington’s Mt. Vernon Estate.

Our task began back here in Burdett, NY where we brought in over 500 gallons of fresh peach juice in early September. We fermented and distilled the juice into peach low wines (1x distilled) which we donated to the project. After completing the necessary paperwork, we transferred the liquid to Mt. Vernon Distillery, a functioning distilled spirits plant at the historical site.

Thomas and I set out for the DC area this past Sunday. After the usual stops at some breweries and distilleries along the way, we settled in Monday night after some dinner with representatives from the Distilled Spirits Council and reporters covering the story.

Work began first thing Tuesday morning. We transferred the low wines over to the distillery, blended with another distiller’s contribution and cut down to 40 proof. The liquid was then divided into two of the five stills that would have been functioning in Washington’s day. Below is a picture of the FLD truck backed up to the distillery entrance so we could transfer the low wines. 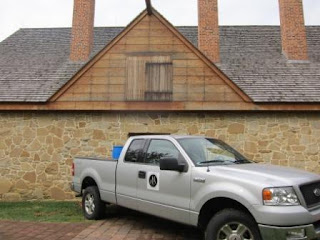 We were honored to be part of a very prestigious group of distillers working on this project. We were chosen as 1 of 3 craft distillers involved in the project – the others: Ted Huber of Huber-Starlight Distillery in southern Indiana and Lance Winters of St. George Spirits in California. We were also joined by Dave Pickerell, former Master Distiller at Maker’s Mark, currently a consultant in the industry, and Joe Dangler, Master Distiller at A. Smith Bowman Distillery in Virginia. Dave and Joe have been involved with previous distillations at Mt. Vernon so were very valuable contributors to the effort. Standing below, L to R, Steve Bashore (Manager of Distillery and Gristmill), me, Ted Huber, Thomas, Lance Winters and Dave Pickerell. 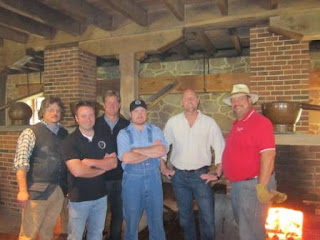 The stills at Mt. Vernon were a little trickier to run than what we’re used to at FLD. While utilizing the same concept, the potstills are heated with direct flame, so controlling the heat of the fire is essential. The condensers are made from whiskey barrels that house a copper coil. Water is continually fed into the barrel allowing it to cool the vapors running through the coil. Patience is definitely required in running these stills. While we can run 30 gallons of brandy in a few hours at our distillery, we distilled less than 15 over a 5 hour span on Tuesday. Pictured below is Thomas resting against one of the condensers. 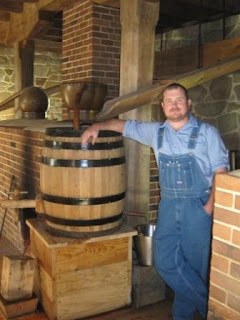 As the stills were up and running, we decided to make a fresh peach fermentation for the media to see on Wednesday. This entailed getting our hands a little dirty by pitting and mashing some peaches into small oak containers. 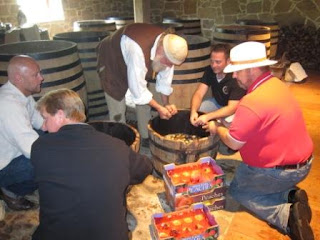 Everything is absolutely pristine at Mt. Vernon. Here is a picture of the mill with stream running through it. The distillery is set on the right beyond it. After work on Tuesday, Steve took us through the mill and actually set everything in motion showing the brilliant engineering behind this one-of-a-kind Evans milling system. 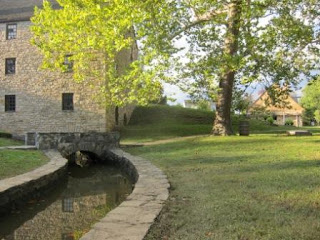 Tuesday night was spent having dinner with the whole crew as well as some more folks from DISCUS and Mt. Vernon. Of course, we had to sample each others’ wares after dinner which made Wednesday morning come awfully early.

We re-charged the still and got things up to boil before the media started showing up. We had a few minutes to kill, so Thomas and I used some items from my costume closet to get a few amusing shots (below). 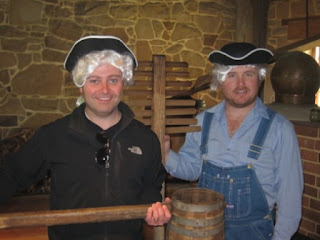 The media started arriving around 11 a.m. I’ll post some of the resulting stories in the next few days, but it was very apparent that this was a national news story. Reporters from the AP, Fox, PBS, etc were all there to learn about Washington’s ties to the distilling industry and the current interest in craft spirits. The highlight for me was a piece that aired on PBS News Nightly Business Report. The segment begins at 21:18, or just click on the barrel on far right below the screen.

After interviews and film footage, we all moved upstairs for a small press conference led by DISCUS and Mt. Vernon’s, Dennis Pogue. The conference concluded with a toast to Washington led by a James Anderson reenactor using the very peach brandy we had been distilling.

How did it come out? The consensus was that we achieved what we were looking for. The distillate is very smooth and while peach is not an easy flavor to extract through distillation, it certainly shines through in what we collected. The end result was about 50 gallons of cut spirit that will now rest in uncharred American oak barrels for 1 or 2 years. The barrels will not add much oak to the spirit, which will help preserve the peach flavor. The spirit will change over time through oxidation, hopefully picking up even stronger peach flavors.

Our work was essentially done. We spent some time that afternoon touring the grounds at Mt. Vernon and then got ready for Wednesday night’s gala celebration. Over 700 people came together to honor George Washington and his contributions to our industry. We mingled with executives from the large spirits companies, politicians, and others. Of course, the bar was well stocked and even included some products from FLD and the other craft distillers.

In addition to a silent auction of celebrity-signed liquor bottles, a live auction yielded $25,000 for a small bottle of rye that was one of the first distilled at the reconstructed distillery (maybe the peach will bring the same someday). The night also included one of the best fireworks shows I’ve ever seen while listening to patriotic music on the portico of Mt. Vernon, overlooking the Potomac. All monies raised will benefit the educational programs at Mt. Vernon.

Here are a couple of photos from the gala event: Thomas and me in front of the main mansion and Jenny with General Washington himself. Stay tuned for more information about our involvement in this historic project and news about our own peach brandy release in the next couple of weeks. 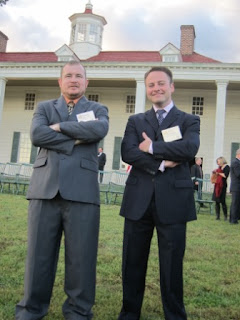 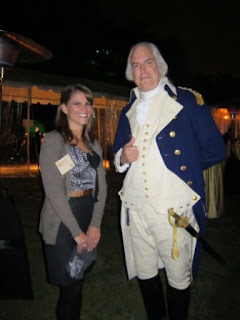