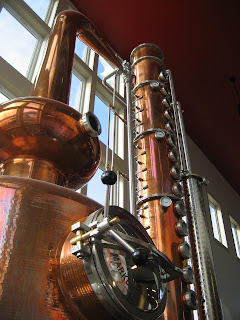 [the previous installment discussed the grains, the preparation of the mash, and the fermentation process used in the making of McKenzie Bourbon]

The fermentation process for our bourbon takes about three days— that’s when the yeast converts the sugar produced from the mashing process into alcohol, carbon dioxide, and heat. During this time, the creation of carbon dioxide causes the mash to bubble and froth. When the yeast has fully metabolized the sugar, the mash, which is now termed a distillers beer, is pumped through a hose into the pot still.

The science behind distillation is simple: the boiling point of alcohol is lower than that of water. So when the pot is surrounded by a hot jacket of steam, the alcohol evaporates while the mash liquids and solids are left behind. When the vapors are then chilled, the alcohol re-condenses into a very concentrated, clear whiskey (also called white dog) of 120 proof, or 60% alcohol. The whole process of double-pot distillation takes about 7 hours.

After the mash is distilled twice it is ready to be transferred to barrels for aging. Left behind in the still is the spent corn/rye/barley and water mixture, which is no longer alcoholic. We give some of this to a cattle farmer up the road to feed to his livestock, while we save some to use as backset to use in the sour mash process (see the Bourbon Production Part I for an explanation of this process). 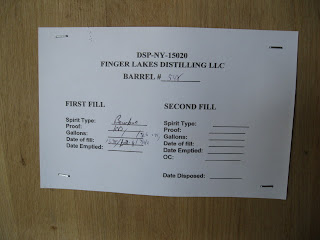 So, the barrels. In bourbon production, the specifics of the barrels used for aging are extremely important. In order for a whiskey to be legally classified as bourbon, it needs to be aged in new, charred, American oak barrels. What that means is that once we’ve used our barrels once for bourbon, we cannot re-use them for whiskey and still call it bourbon. Many large-scale American distilleries will sell their once-used bourbon barrels to Scotland, where distilleries can use them to age Scotch. We use ours a second time to age our Maplejack, as well as for other products that are in the works. Our barrels are hand-crafted by coopers in Missouri and Minnesota. 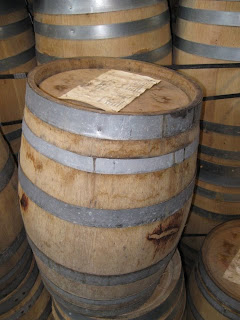 The newly distilled whiskey is mixed with some water to lower the proof, and is then transferred into barrels.Right now we are using mostly 10-gallon barrels to age our Bourbon, so that the aging process is expedited and we can produce a nicely aged whiskey in less than 2 years. After about 12-18 months in the barrels, we transfer the now caramel-colored whiskey into Chardonnay casks from local wineries, which gives the bourbon a chance to breathe. We are also putting up several standard 53 gallon barrels for extended aging. Some of this whiskey is now going on 3 years old and is showing lots of promise (yes, we check in on it routinely!) 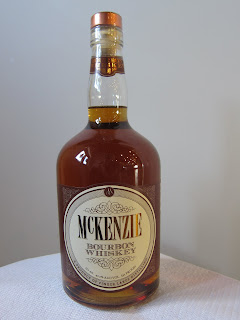 After a month in Chardonnay, we smell and taste the nearly-complete McKenzie

Bourbon to make sure it is ready to be bottled, labeled, and put on the shelves. At this point it will have the tasting components that you’re already familiar with, our signature buttery, smooth bourbon. And voila, there you have it- McKenzie Bourbon, from the ground up!