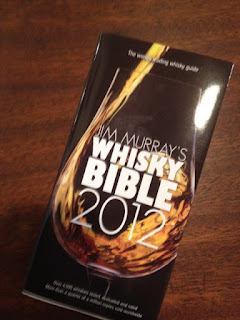 Jim Murray, one of the most revered whiskey writers in the world, just released the 2012 edition of his Whisky Bible. Thomas and I had the pleasure of meeting Jim at a conference in Kentucky a few years ago where he conducted a tasting of unique whiskies from around the world. Jim is passionate, witty, and at times, brutally honest about whiskey.

So it was with a little trepidation that we submitted a range of FLD whiskies for review in this year’s edition. Our Bourbon, Rye, Wheat and Corn whiskies were amongst the 1,210 new whiskies Mr. Murray tried for the 2012 Bible.

So how did we do?

We did pretty well. Scores are based on a 100 point scale.

On top of the list was our Glen Thunder Corn Whiskey which scored a 92.5 or a “Brilliant” on Mr. Murray’s scoring guide. Some comments: “Beautifully distilled…absolutely classic corn white dog.”

Mr. Murray also was very kind to our McKenzie Rye rating it a 85.5 or “Very good to Excellent.” He writes: “for sheer content and charisma it is a great whiskey to find…Big oils, but then a wall of firm, fruity muscovado sugars and light liquorice. Some superb spices and chocolate, too.”

We also sent a bottle of our first batch of McKenzie Wheat, which is now sold out. It scored an 82 or “Good Whiskey Worth Trying.” He offered the following: “A few heads and tails certainly up the body and make the sugar-honey notes sing.”

Surprisingly, our McKenzie Bourbon rated the lowest of the FLD products (surprising, because it is our best seller here at the distillery). Still, we received a respectable score of 78 (“Average”) and comments included: “Gets off to an oily, rocky start…But once it gets going…the compensation is worth the wait as the toffee honey becomes a real chewathon. Good late spice too.”

Overall, we are proud of the ratings. For the first time, Mr. Murray included a special section devoted to American craft distillers. In looking through the other reviews, the FLD line-up scored very well in comparison.

While comments from our fans and customers are most important to us here at FLD, it’s also good to receive some praise from someone as well respected as Jim Murray. We hope to have the latest version of the Whisky Bible for sale in the tasting room in the next few weeks. Be sure to stop by to get a copy (and some of the great FLD whiskies that are included in it!).