In April 2007, while researching this business idea, my dad and I attended a conference held by the American Distilling Association, a trade group representing the growing micro-distilling industry. After arriving in Louisville, KY, we wandered down to the opening night mixer and encountered a number of M(a)cKenzies in attendance. There must be something in the McKenzie bloodline that draws us to the business.

One of the McKenzies was a particular character, Thomas Earl McKenzie, from Monroeville, Alabama. At the time, I could only understand about half of Thomas’s comments (I’ve since started to talk like him). We hit it off immediately and after returning from the conference continued to explore a possible working relationship. 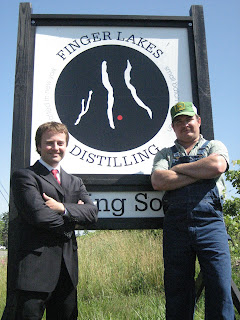 While I have spent most of my working career behind a desk in economics and finance, Thomas has hands on experience in farming and alcohol production, including winemaking, brewing and distilling. It was obvious to both of us that it was a good match. I could focus on the marketing, finance and legal aspects of the business, while Thomas could head up our production efforts. After spending more time with each other, however, we both realized that it wouldn’t be so simple – Thomas has the brains and creativity to help with the business aspects and I also hope to help with production.

Thomas and his family (wife, Aja, and two daughters, Pierce and Erin) committed to the endeavor by moving to the area last winter. Since then, they have added a son, Colin, to the crew.

In developing this business, the people we’ve met with have taken a great deal of interest in the differences between our backgrounds. I guess it makes for an interesting story, but all I know is that we’re having a blast getting this off the ground and we are both excited to offer only the best distilled spirits for our customers.

That’s me on the left (I really don’t like wearing suits anymore). Thomas Earl is on the right.